A very nice "spin-off" of BlockCAD, a great LEGO building program reviewed on this site, AnkerCAD lets you build virtual models with bricks. The bricks are based on AnkerStein ("AnchorStones" in English), excellent LEGO-like toy that is very popular in Germany. Similar to BlockCAD, AnkerCAD software lets you construct a virtually infinite number of 3D models using Anchor Blocks. The blocks themselves are smaller than an average LEGO piece, and there are more curved pieces - making it much easier than LEGO to build a medieval structure :) The interface is very intuitive, and you can even design your own blocks and add their "block definitions" into the program. Highly recommended to anyone who likes building blocks.

Note: I came across some interesting information while looking up this game. The official AnkerStein website claims that Anchor Blocks are the oldest toys in Germany: "They have been with us since the late 19th century: the Anchor Stone Building Blocks. Being the first 'toys' ever, they were originally marketed under the name " Richter's Patent Building Sets ". As Anchor Stone Building sets they are now back on the market. Rudolstadt - the city that once housed the cradle of the Anchor Blocks - now witnesses the revival of a legendary toy. The man who made the Anchor Blocks famous all over the world was Friedrich Adolf Richter. After their production had ceased for decades, they are now being produced again, strictly following the inventor's original designs. Under their old trademark - the anchor - they have been marketed since 1995. In 2000 alone, 10,000 sets were manufactured. They have always kept their fascination for young and old alike." 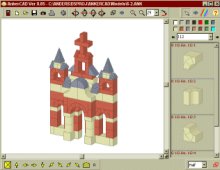