2005: A Game of Macroeconomics is an excellent free game that achieves what many expensive releases have tried and failed: teach basic concepts of macroeconomics in an accessible and fun package. Designed by N. Gregory Mankiw, one of the US' most famous economists, 2005 is designed as a supplementary material to Mankiw's Macroeconomics textbook, published by Worth Publishers.

The game casts you as a US President who is elected in the year 2005. Your goal is to set monetary policy (via setting money growth rate) and fiscal policy (via setting taxes/GNP and government spending/GNP ratios) to keep the economy healthy. Your ultimate goal is to get re-elected for as long as possible. If the economy does badly, your popularity will fall, and your chance of returning to the White House will be diminished.

As a Macromedia Shockwave game, the controls of 2005 are easy to learn, and the graphics are pleasant. The screen is split into three sections. On the left side of the screen are time series plots of three main economic indicators: inflation, unemployment, and output (GNP) growth. On the right side, you can read current news and look at your approval rating. You can toggle on a detailed table of other data at any time, although the charts and news are usually enough to make decisions.

Mankiw's decision to limit user input to three variables makes it much easier to observe the impact of your policies, and the game is far from simple even if it appears that way. As in real life, unexpected events of all sorts can happen at any time, and correctly guessing the effect of news events (for example, OPEC's announcement to cut oil production will lead to rising prices, which will put an upward pressure on inflation and potentially lowering output). After several sessions, you will learn about some basic relationships between major economic indicators, and how monetary and fiscal policies affect the economy. Overall, if you are interested in learning more about macroeconomics but were intimidated by complex textbooks or software, 2005 is a good starting point. 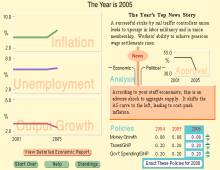 2005: A Game of Macroeconomics screenshot

People who downloaded this game have also downloaded:
Advanced Thinking Skills, Dr Ruth's Computer Game of Good Sex, Adventures in Math, Amazon Trail, The, Where in The World is Carmen Sandiego? Deluxe Edition