A classic game of monopoly in one of its first PC versions ever. Your ultimate goal is to defeat all your opponents by making them go bankrupt. You will walk around the board, buy and sell parcels, build houses, hotels... Do I really have to explain the rules of Monopoly?

Monopoly is a great text-only version of the famous Parker Brothers board game that offers many more options than most commercial versions of the game. The most amazing thing is that Adam Stevens, the designer, manages to pull all this off with only ASCII characters. The review at Textmodegames.com says it all:

"Gone is the slow, almost languid pace of the original, replaced by a fast-paced, tension-filled battle to the bitter end (and yes, you will actually want to finish the game!). Like any great computerized board game, this implementation eliminates all of the tedious, time-consuming bookkeeping, allowing you to concentrate on strategy. And what strategy there is: Monopoly supports house and hotel purchases, mortgages, auctions, property swapping, haggling, and even cheating, all of the advanced features that make the game fun.

But by far the best feature of the game are the computer opponents, Bill, Fred, Bob, and Adam. Each one is controlled by a separate AI file, and they each have their own personality. Fred and Adam are the straight men. They take the game seriously and they know what they are doing. You can actually learn a good deal of strategy just by watching them. Then there's devious, wisecracking Bill, who tries to cheat his way out of trouble with lines like, "Gosh, is that a dodo I see over there?" Rounding out the group is the eternally hopeless Bob, who prefaces almost every idiotic move he makes by saying, "I don't understand this game". It's a riot watching these guys play; in fact, you could even setup a game with only AI players, just to see them going at each other!

If, like me, you have ever wondered why Monopoly has stayed so popular for so long, give this game a try." Recommended! 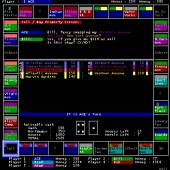 People who downloaded this game have also downloaded:
Monopoly Deluxe