Tintin on the Moon

The first PC game to feature popular classic comic character Tintin, Tintin On The Moon is a competent conversion of classic Spectrum/Amstrad game of the same name. Based loosely on Explorers on the Moon episode, the game is an action game, with vehicles that appear in the comics (e.g. the spaceship) and more or less the same explore-the-moon plot.

True to Probe's fashion, Tintin on the Moon features solid animation and good graphics (even if they were pale 4-color CGA replica of the colorful Spectrum original). After the novelty wears off, though, the game is just a standard first-person shoot-em-up fare: pilot Tintin?s ships to avoid asteroids in the first episode, for example. The game does shift perspective to side-scrolling platform on later levels, but none of them is particularly memorable. The flight portion turns out to be just the intro bit to each platform-style level, so you will have to suffer through multiple asteroid fields if you want to see the ending.

For all the blockbuster license behind it, Tintin on the Moon simply doesn?t pack enough gameplay to make it rise above the crowd of average shooters. The levels end all too soon, and there is no goodies from the comics (e.g. comic book-style cutscenes) to leverage full use of the license. A mediocre game at best. Fortunately for fans, Infogrames? later use of the license is much better?check out the two other Tintin games on this site. 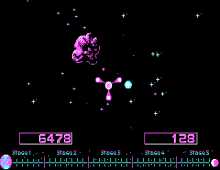 Tintin on the Moon screenshot