Thrust is a faithful fanmade remake of classic C64/Spectrum ZX game of the same name, which is in turn based on Gravitar, ATARI's arcade classic. Your goal is to maneuver your spaceship through treacherous caves, fighting both gravity and the evil Empire's defense systems to collect Klystron Pods. After locating the pod, you must attach it to your ship and make your way up again to search for the next one. All the while, you must keep track of your fuel supply, and watch out for the rocks. Once you have beaten all six levels, the game restarts but adds new challenges, including reverse gravity and invisible levels.

Like the original, Thrust is easy to learn, but hard to master. The game is also quite difficult, but good physics and smooth gameplay will keep you hooked in the same way that Asteroids and Gravitar kept you hooked years ago. The gameplay is somewhat repetitive, but different backgrounds of each level and new challenges add to the variety. This version is a more faithful recreation of the original than Thrust Deluxe, another remake reviewed on this site (and yes, I know the two reviews are identical - but hey, it's the same game ;)). Unlike Thrust Deluxe, this version is an open-source game released under the GNU license, which means we will hopefully see future ports or modified versions in the future. 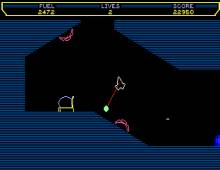