The Thor Trilogy is a fun early shareware ASCII-based action/adventure game, similar to ZZT. One of Todd Replogle's earliest games at Apogee before he went on to design classics like Cosmo's Adventure, The Thor Trilogy contains three games in the registered version (the version for download here), all with the same objective: locate three missing items that are scattered throughout Thor's domain. You control an ASCII smiley face as he travels through 100% text-based world where objects and terrain are represented by characters like '@' and inverted capital letters (which indicate the next level, incidentally). Billed as an "action/adventure," the game is geared towards action than adventure, since you have to shoot many monsters along the way and collect power-ups like potions, food, and shields to stay alive. Once nice thing about the game is the considerable freedome of movement: you can re-enter most levels you have already traversed, making the game much less linear than most. Overall, a nice and very rare relic of Apogee's golden 80's, and a solid ASCII game in its own right. Recommended, although not a Top Dog. 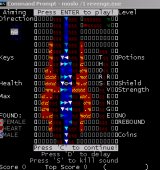