Space Games is yet another collection of thoroughly average arcade games sold as one compilation. Keypunch was one of the world's first "shovelware" publishers, and this title is no exception. You will find in here four games, none of which matches the caliber of any one Atari game. In "Space Trek," you will defend the federation from hostile attack. "Invaders" pits you as the Earth's last line of defence against an alien armada. In "Alien," you will explore the universe and defend yourself against unforeseen danagers. The last game of the bunch is "Lunar Landing," in which you must pilot a starship to a safe landing. These games are nothing but cheap knock-offs of better-known games. Recommended only for die-hard collectors who must collect every game ever made. 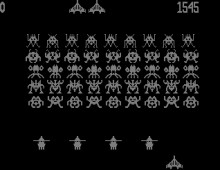