Pray for Death is a little-known one-on-one fighting game that is quite decent, despite the fact that it is not much more than a ripoff of Killer Instinct: "realistic" moves, lots of gore, and the ability to pull off multiple combos.

As far as fighting games go, Pray for Death is not bad. There is even a coherent plot here: you are dead, and you have to beat other warriors in Hell (?) for a second chance at life. All the ten warriors you can play are diverse and interesting, especially the military robot and Anubis. The bosses and Death himself are all nicely designed, with some unique attacks. The game is tough, and control is sometimes jerky although the animations are very smooth most of the time, with plenty of background effects, rendered arenas, and even the ability for the camera to 'zoom in' on the action. Like most other fighting games, the ease of performing regular and special moves depend largely on your control pad. The number of options is good: you can play 10 warriors in solo mode, Death himself in Death mode, tag-team mode, multiplayer leagues and tournaments, and two-player VS mode.

Pray for Death is similar to Xenophage in the fact that it is a fairly decent game that falls well short of the quality seen in other 2D fighters released at the time, let alone arcade and console fare. It's not bad, but it is nothing exceptional either. 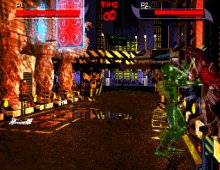