More of a historical curiosity than a classic game worth preserving, Mysterious Worlds is a rare DOS version of the Amiga game of the same name that was included on the coverdisk of an AmigaFun issue. The game itself is a banal platformer that has sparse graphics, repetitive gameplay, and really no redeeming value I can think of. Perhaps it gets more exciting after 15 minutes, but I don't have that much patience to find out ;) Really should be considered as a game 'demo' than a real game. Yes, it's just a coverdisk game, but surely they could have thought of something better than this. 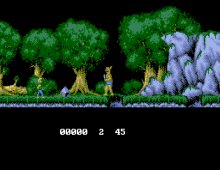