Yet another game by Windmill Software "inspired" by arcade originals, Moon Bugs is a blatant clone of Galaxian that unfortunately adds little to the tried-and-true "shoot all aliens in sight" concept. Your goal is to defend earth against insect invaders who descend from the top of the screen. That's pretty much it—and there is no variety in gameplay to make things more interesting, either. It's just shoot, shoot, and shoot until you get bored of insects that are several pixels wide. Quite a disappointment compared to similar games such as Cosmic Crusader or even Galaxian itself. Windmill's later games, most notably Digger, are much better at enhancing the original concepts. Even the 4-color CGA graphics of Cosmic Crusader is more detailed than EGA in this game. My advice: try it out, and go play Galaxian instead :) 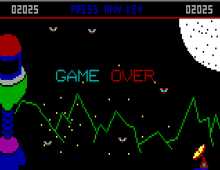