Mayday Squad is a fun CGA hostage rescue game similar to Mindscape's classic Hostage but with more options and variety despite inferior graphics. The Red Legion has taken control of the Lutonian Embassy and issued 143 non-negotiable demands. U.N. policy, of course, prohibits compliance to any of them, so it is up to you, the Mayday Squad, to barge into the embassy, kill the Red Legion leader before the deadline of their demands. You also must find and rescue a daughter of the Lutonian Embassador who was trapped inside the building and is hiding herself. All in a day's work, as it were.

The Mayday Squad comprises 3 experts: Captain, Communications, and Demolitions. You can change the personnel for each position, although that hardly makes a difference in the game. Gameplay is mostly from a 3D, first-person perspective, and is generally adequate, although the blocky graphics and generic enemies dull the excitement. The ability to call for backups and the integration of strategic planning into the game help make it stand out from the crowd, but not nearly enough to boost my patience at shooting dozens after dozens of enemies who look exactly alike. 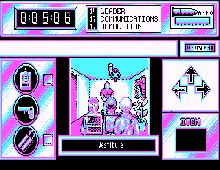