Dog Daze Revolution is a great fanmade remake of Dog Daze, a rare game released for Atari 8-bit computers in 1981. This Windows remake is actually based on Dog Daze Deluxe, the 1983 shareware release of the game that the author improved by adding depth to objects and computer AI. You control a dog who must race another dog (controlled by a computer or another human player) to "claim" a blue fire hydrant that randomly pops up on the screen. "You claim the hydrant by touching it or by shooting a bone at it. If you shoot and miss, you must pick up your bone before you can use it again. If you claim the blue hydrant before your opponent, it becomes yours and changes to your color. Then a new unclaimed hydrant pops up somewhere else on the screen. If you run into a hydrant already claimed by your opponent, you are frozen for two seconds. The row of hydrants at the top keeps track of your claimed hydrants versus those of your opponent. If the whole row becomes your color, you win the game. A reckless driver drives through occasionally, knocking out claimed hydrants. You must avoid getting run over."

Like all great arcade classics, Dog Daze Revolution takes 30 second to learn, but will keep you coming back for more. Thanks to a few Peruvian programmers who call themselves Twin Eagle Group, you can now experience Gray Chang's lost classic in full 8-bit, 16-color glory on MS Windows. The game looks like a lost Commodore 64 games, and even the "intro" scene and tinny beeps are reminiscent of the golden days of yore. It's fun, unique, and like the best of 8-bit era, incredibily addictive despite its simple premise (even if I find computer dogs to be a tad too dumb ;)). Two thumbs up, way up! 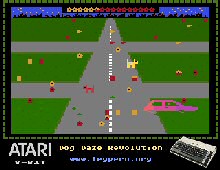