One of the best Breakout (aka Arkanoid) clones ever made, Crystal Hammer was one of Magic Bytes' last hits on the Amiga that failed to make an impact in the crowded PC market. Everything you love about Arkanoid is here, and enhanced dramatically with bright SVGA graphics, great sound effects, and plenty of surprises. There is even a plot in this one: you are a galactic "dustbin man" (Roger Wilco, anyone?) who is tasked with cleaning the universe of "crystalline contaminations." Yeah, right ;)

Gameplay will be familiar fare to most people- bounce the ball off a pad (called "shuttle" in the game) to destroy walls of crystal blocks that move towards you from the top of the screen. Certain blocks, once destroyed, yield different items that you can collect. These items can either help you, or make your job more difficult. They can reduce the size of the ball so that it is harder to steer, turn the ball into a fireball which causes bigger damage, lengthen your pad, make the ball stick to the pad (instead of bouncing off it), and many more. Certain crystals can only be destroyed with special balls, while some others require 3 hits to destroy. There are even invisible crystals that appear only after the first hit, and multiple balls to confuse you. Throughout the game's 50 levels, surprises seem never-ending, and the layout of crystal walls become increasingly devious... and challenging. Overall, Crystal Hammer is definitely one of the best Arkanoid clones ever made-- and a must-have for every action fan that will keep you addicted for hours on end. 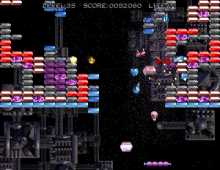