Cool Croc Twins is a cute little platformer that has never heard of the wonders of gravity. ;) The two crocodile stars of this game, Punk and Funk, have a big problem. Their girlfriend, Daisy Crocette (*groan*) seems to have gotten herself in trouble, and as a result, it's up to the croc twins to get her back.

To get Daisy back, Punk and Funk have to run through 60 levels, each of which contains one static screen with a bunch of enemies, blocks and lights. The object is to make all of the lights glow, and the cool croc twins do that by bouncing on them. If it all sounds pretty surreal, that's because it is. But it's actually quite a simple game to get the hang of. The crocs run around the edges of the screen. Pressing the fire button makes them jump to the other side of the screen, or onto any blocks that are floating in the level. This is also the only method of killing the various enemies in each level, whose only purpose in life is to turn off all the lights that you spend forever turning on.

There's two crocs, so there's naturally a two player mode which helps a lot-- if you can find a victim to play the game with, of course. Despite the game's fun mix of action and puzzle elements, sixty levels consisting of relatively the same premise gets very repetitive very quickly. Overall, this is a decent conversion of the Amiga and C64 old game, although it won't hold your interest for more than a few levels once the novelty wears off. 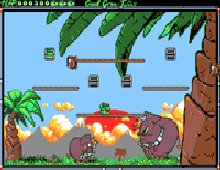