Butterfly 660 is a fun freeware platformer that does what very few action games have tried to do: offer a solid storyline that develops as you play, with intriguing plot twists along the way. Unfortunately, this comes at a price of challenge - the game is very linear and easier than most. But frequent plot developments told via well-made cutscenes will keep you glued to the very end.

The plot is a wacky blend of Robocop meets Mega Man: you play a Robocop-style Butterfly (yes, this IS actually how the designers name their futuristic police robot ;)) is sent to investigate the disappearance of several Swiss agents. Armed with a built-in energy cannon, you infiltrate a mysterious base and... encounter a huge army of stupid enemy robots.

Billed as an "action platformer with a thick RPG-like plot", the story is indeed Butterfly 660?s strong suit. The sci-fi premise develops into a very neat little story, with more than a few twists and turns presented via dozens of very good cutscenes. The game's graphics, while cartoony and bears no pretense of a commercial game, is very well drawn and professionally presented. The sound effects and music tracks are also well chosen, even though most of them are MIDIs "ripped" from familiar tunes such as the Batman theme.

Butterfly 660 is a very easy game - which means if you are looking for a challenging platformer, look elsewhere. The game is also very linear, which, along with the cutscenes, makes the game more akin to an "interactive movie" than a long game. But you will keep playing anyway, just to see the next cutscene and find out how the story will end. The designers took the risk of focusing on the storyline in a genre not known for good stories - and they succeeded in spades. Highly recommended to anyone who loves a good sci-fi romp, except die-hard action gamers who need a good target practice. 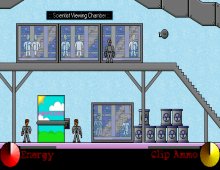