Wind in The Willows

Wind in The Willowsis the second game in Leisuresoft's "Leisureland" series of adventure games aimed at kids ages 5 to 8 who are learning to read. Unfortunately, it suffers from obscure puzzles and annoying random elements that will make it an exercise in frustration for all but the most patient kids.

The plot will be familiar to anyone who has read a few fairy tales: you are well-mannered mole called-- err-- Mole, who awakes one day to find that his friend Toad has been kidnapped. Gameplay consists of going to various locations and choosing what to do from a number of multiple choices. What makes the game extremely aggravating is the fact that some objects you need, as well as some crucial encounters, are random. This makes it almost impossible to finish the game without many trial-and-error sessions where you go everywhere over and over again to trigger the missed event. Worse still, the objects you collect are used automatically almost every time they are needed-- there is no way to select each item from the inventory individually to be used. This limitation destroys any potential for fostering logic and deduction skills in kids, and makes the game very passive. Overall, Wind in The Willows is a disappointing title whose "educational" value is limited only to perhaps increasing reading skills in young kids. It's not even well-written, however, which makes it more or less useless. Steer clear of this one, folks. 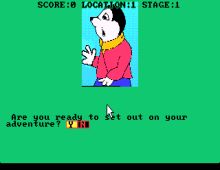 Wind in The Willows screenshot