One of the classic games by Scott Adams in the early '80s, Sorcerer of Claymorgue Castle is an above-average dungeon romp that sends you, a young sorcerer's apprentice, into the dreaded castle to retrieve a magical artifact. The abundance of spell-related puzzles harks back to Infocom's classic Zork games, although the parser here is vastly inferior (it was coded on the same engine used for Adams' Fantastic Fourgame). Still, some clever puzzles and decent writing makes this a game worthy of Scott Adams' name. 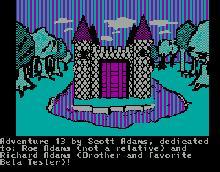