Don't be fooled by cute graphics and famous characters. Snoopy and Peanuts is a pretty boring and incredibly short game to play! There are quite many drawbacks in this product including the stupid single item inventory and almost no dialogue at all. And where did the famous humor go? Try this game just to see some nice cartoon graphics and don't bother much with it...

Errr... I guess this is supposed to be an Adventure - I just don't know what exactly the goal of this is. Alright, so I wander around - slowly - ok, maybe Snoopy likes it relaxed and everything - that dog is definitely not a fast runner. OK, there we have it - wandering through the world of the Peanuts. That's not bad, but still pretty useless. After 10 minutes (Snoopy is definitely slow!) I came across Linus (or was it Rerun? I always confuse those names...) who lost his blanket - ok, I though - so I go looking for it. Yes... so I did. Haven't found it yet and I am not sure if that is even important.

For all of those fans of Charles Schulz - take it as a tribute - it IS nice to have a trip into Peanuts-World - but that's all, don't take it for a serious Adventure.

The first and only game based on one of the world's most popular comics is a very disappointing game that manages to capture only one aspect of the cartoon perfectly: the nonchalant, see-if-I-care attitude of Snoopy the complacent dog.

Granted, bringing the world of The Peanuts onto the computer screen is a big challenge, due to the fact that the cartoon's appeal rests more on the philosophical, almost Zen-like placid sense of humor, than on the adrenaline rush or the excitement of adventure of most cartoons. Nonetheless, the absence of this subtle Peanuts-style humor, coupled with a painfully cumbersome interface (Snoopy can carry and use only one item at a time), makes the game very tedious. Although you, as Snoopy, can wander around town and meet many Peanuts characters, none of them has anything interesting to say, and most of the time just behave like stone statues. Puzzles, or what excuses of them, are few, and seem to be there just for the sake of giving you something to do, rather than having any relationship with the (thin) plot. Overall, I doubt even die-hard Peanuts fans will be motivated enough to play the game for more than a few minutes, let alone finishing it. Devoid of plot and the gentle humor of the comics strip, this computerized version of Snoopy & Peanuts serves only as a reminder of how not to design a game.

Well it has all the characters, and you can roam around the neighbourhood. But I have to admit that I did get rather bored and lost as soon as I started playing. Bit of a bummer, cos I love the Snoopy & Peanuts cartoons. 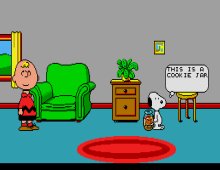 People who downloaded this game have also downloaded:
Snoopy, Garfield: Attack of the Mutant Lasagna, Sherlock: Riddle of The Crown Jewels, Seymour Goes to Hollywood, Sherlock Holmes: The Vatican Cameos