You are a famous young American detective who has been invited to Tresyllian Castle by your old friend Tamara Lynd. She is being haunted by the Tresyllian ghost, who seems intent on scaring her off. Can you solve the mystery of the castle?

One of Infocom's weakest titles, Moonmist is quite average compared to the company's other games: room descriptions are sparse, and most puzzles are uninspired. Even though puzzles are easy, they do not have the charm of puzzles in Wishbringer to keep you hooked. Perhaps one reason room descriptions lack detail is that the game box includes a neat tour booklet that already describes the castle in detail. Still, that is not a good excuse for a company who is famous for strong attention to detail in their games. On the upside, the game offers four variations in the plot (more or less random as you play), which gives the game some replayability. Each plot variation is only slightly different from the other three, however. Another positive aspect is the NPCs, who are quite well written and on par with characters in Infocom's other games.

With easy puzzles and considerable replayability, Moonmist is perhaps best considered as a game to introduce people to murder mystery text adventures. If you are new to this genre, Moonmist is a good starting point before you play the likes of Suspect, The Witness, and finally Deadline. 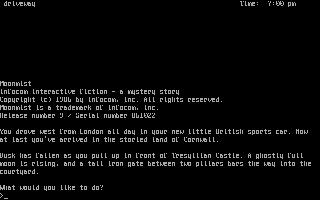 People who downloaded this game have also downloaded:
Hitchhiker's Guide to the Galaxy, The, Leather Goddess of Phobos [Solid Gold], Bureaucracy, Mind Forever Voyaging, A, Lurking Horror, The