Often billed as Infocom's first serious science fiction (a fact that probably explains its poor sales record), A Mind Forever Voyaging ranks with Trinity as my most favorite Infocom games, and one of the best games I ever played. The plot of the game is as unique as it gets, and explains why Steve Meretzky is one of the very few computer game designers to be officially honored as sci-fi writer. You are Perry Sim, a hitherto normal person who wakes up one day to find that you are in fact PRISM, the world's first sentient computer, and that the illusion of your earlier life had been a necessary part of your programming process. Your first mission: test the value of a controversial long-term economic stimulus program. You do this by going into a virtual reality computer simulation of the country ten years hence, and make recordings of everyday activities that can evidence the plan's success or failure.

Unlike other Infocom classics, A Mind Forever Voyaging is meant to be experienced rather than played. The first two parts of the game have almost no puzzles, focusing instead on exploration and discovery as you walk the streets of Rockville and observe the changes that take place over time. And what a world it is to explore! Rockvil is a bustling city that is brought to life by convincing and detailed descriptions. Examining most objects and buildings often yields more detail and historical anecdotes. Your identity as a computer is cleverly reinforced by a computer-screen interface that allows you to go in and out of the simulation at will; in Communications Mode, you can read up on world news and research the library for information, while the Interface Mode allows you direct control of subsidiary computers in the complex. Most of the puzzles are in the third and last part of the game, where you must fight for survival against those who are displeased with data you uncovered in the simulation. Although there are only a few, they are very clever indeed. In fact, Meretzky was so pleased with the puzzle at the end of this section that he used virtually the identical one at the end of Leather Goddesses of Phobos 2 (which is not even 1/1000th as good as this game).

A Mind Forever Voyaging remains today as a major milestone in interactive fiction-- a game that transcends its "game"-ness and becomes a truly captivating interactive novel. Its richness of detail and level of depth make the game enjoyable even when you're playing it for the third time or more. Definitely a must play for all IF fans, and especially fans of serious sci-fi.

My first experience with text adventures was with a game called The Boggit on the ZX Spectrum. It was the standard "find the sword of sharp pointy death and defeat the dragon of burning arses" fare and this was the yardstick with which I judged all text adventures from then on. I naturaly assumed that they would all be goblins and orcs and beardy senile wizards - ie slightly mundane.

A Mind Forever Voyaging has destroyed any preconceptions that I had. Written by one of the text adventure industry's best authors, Steve Meretsky, AMFV casts you as a sentient computer in the 21st century. In a troubled age of economic ruin and widespread decay, it is your job to enter a simulation baed around a test plan aimed towards a more properous future. The first two-thirds of the game involve exploring this simulated world and interacting with it to gather information, and features some of the most detailed and involving writing that you will ever find in a text adventure. Ultimately you will be encouraged to question not only the world around you, but also the very nature of your existance. It is not until the end of the game that you will encounter any puzzles per se, but you will be too swept up in the exploration parts and the underlining story to care.

Featuring one of the most amazing endings to a game that I have ever encountered and some truly astonishing writing, AMFV will captivate you in way that few computer games can. A fantastic game, heartily recommended. 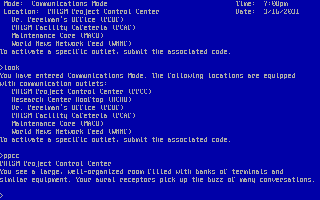 People who downloaded this game have also downloaded:
Leather Goddess of Phobos [Solid Gold], Lurking Horror, The, Bureaucracy, Trinity, Hitchhiker's Guide to the Galaxy, The