If there's an award for 'Best Title for a PC Game' floating somewhere out in the ether, Leather Goddess of Phobos 2 would have to come close to taking the top spot. The reviews of Leather Goddess of Phobos 2 have always been mixed, but it was designed by Steve Meretzsky of Spellcasting fame, and that is perhaps one of the reasons its popularity has endured. Oh, and it contains lots of sexual innuendo.

Leather Goddess of Phobos 2 is a typical point 'n' click adventure with many similarities to Microprose's Rex Nebular and the Cosmic Gender Bender. You play one of three characters - Zeke (a guy), Lydia (a gal) or Barth (an alien) - whose spacecraft crashes into Earth. Giving the player this sort of choice worked with other adventure games of the time, such as Indiana Jones and the Fate of Atlantis, but it doesn't quite gel in Leather Goddess of Phobos 2. There's not much difference between playing Zeke and Lydia, although Barth the alien's journey is a little more interesting and varied.

Most of the puzzles are quite simple or repetitive and you get the feeling that Meretzsky designed this game primarily as a vehicle for humor, rather than any great desire to create a 'masterpiece'. The humor in the game is an acquired taste. Some may find it clichéd, politically incorrect and sexually offensive, while others might love every minute of it. Graphically, the game was a disappointment even for the time it was released. Much of the graphics seems a bit stilted in comparison to, say, Monkey Island II or King's Quest V, but Infocom have never followed the lead of Lucas Arts or Sierra, so some people may like the original graphical style.

Leather Goddess of Phobos 2 is not for everyone. Think of Monty Pyton - you either think it's hilarious or so juvenile and unfailingly British that you want to get up and smash your first through your television. That's what Leather Goddess of Phobos 2 is like. Although it would be best not to smash your fist through your computer monitor if you don't like it.

Leather Goddesses of Phobos 2 is one of the most sought-after oldies in existence. It is ironic, then, that it happens to be one of the worst computer games ever made in any genre. Even more ironic (and incredulous) is the fact that it was designed by Steve Meretzsky, the creative meistro behind such classics as Infocom's A Mind Forever Voyaging and the original Leather Goddesses of Phobos.

So what makes this game so awful it should be forgotten? The more you play, the more you can't shake the sinking feeling that Meretzsky is perhaps trying to appeal only to the testosterone-high, pea-brained section of the gaming market. Just about everything else in the game (except the good graphics-- but then, it takes up 14MB of disk space) is either badly designed, or badly executed. In the beginning, you can choose to play as either Zeke, Lydia, or Barth the alien who crash-landed on earth. Despite this illusion of longevity, each path you take can be finished in a few hours-- there are few items to use, and you don't even need to use everything you can take. Playing Lydia is exactly the same as playing Zeke's game, except that you screw males instead of females (yup, you heard that right-- ergo, that testosterone appeal), and Barth's path is even shorter. Because the game uses a one-click-does-all scheme, you can finish the game merely by clicking madly everywhere on the screen (it's not easy separating items that can be picked up from the rest).

Overall, the game is a big disappointment and a disgrace to the Infocom name. Juvenile dialogues, insipid puzzles, and out-of-place "mature" content seem like Meretzsky might be targeting this game a tad too narrowly. Still, that's no excuse-- Meretzky's own Spellcasting games were also intentionally sophomoric, but they were much, much more enjoyable to play and do require intelligence to solve. LGOP2 *might* be considered an old game for some, but not unless you lower the standards to ground-level. Those who've been looking for this game-- proceed at your own risk. 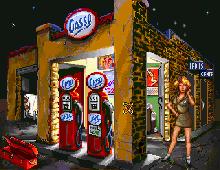 People who downloaded this game have also downloaded:
Leather Goddess of Phobos [Solid Gold], Hitchhiker's Guide to the Galaxy, The, Return to Zork