A fascinating political thriller based on best-selling Frederic Forsyth novel of the same name, The Fourth Protocol is a good game that is bogged down by cumbersome interface and a very slow pace that makes it very boring in mid-game. The plot is Forsyth at his best: in the Soviet Union, a secret faction of high-level minds have hatched "AURORA," a plot to rule the country that even the KGB is unaware of. Master spy Kim Philby and a high ranking Soviet official are at the helm of the cabal, and British agent Jim Preston is the only person who can stop them. But can he stop them in time?

You, of course, play the novel's hero Jim Preston, and your job is to uncover AURORA and expose the masterminds. The game plays like a spy thriller, requiring you to read a lot of information, interrogate suspects and informants, and correlate facts and clues together to form the big picture. You can order wiretaps, monitor suspets, and engage in other sorts of spy activities. The problem is that the game screens are quite static-- most of the time you'll be staring at your desktop and various monitors, or some dense information in various TOP SECRET folders. The utter lack of animated cutscenes makes the game quite dull to look at; although a lot of interesting plot twists and developments occur during the game, they are communicated via text-only descriptions, which are not as well-written as, say, Infocom's Border Zone. Still, with very challenging gameplay and intriguing plot, The Fourth Protocol is well worth a try for fans of this niche genre. 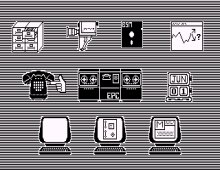 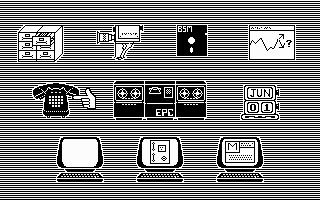