Dungeon of Shalan is a primitive adventure/action maze game that plays like a clone of Atari's classic Indenture. Your task is to find the evil Shalan in his dungeon and kill him. But before that, you must first confront his minions of creatures, ranging from the deadly skeletons to the mischievous zombies who steal the things you're carrying. The friendly boomerang, though, will sometimes bring the things back to you.

You can pick up various objects in the game, including the sword and other special items, such as the emerald bird that must be found in order to defeat Shalan. Unfortunately, you can only carry one object at a time, so you must drop what you're carrying before you can pick up something else. After you're done with the new item, you might be able to find the old one where you left it, unless the zombie stole it or the boomerang picked it up and brought it back to you.

As in other maze games, the genre that was popular in the early 1980s, Dungeon of Shalan combines elements of adventure, fantasy, and arcade genres: you explore the dungeon in a fantasy RPG setting, pick up objects and use them for various purposes like in an adventure game, and there is fast-paced real-time action like in an arcade game. It's an admirable effort that unfortunate falls short due to limited gameplay and repetitive monsters and mazes. Thumbs down for this one. 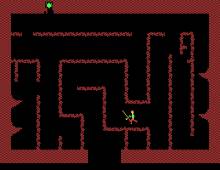