One of the most - if not THE most - obscure CD-ROM adventure games in existence, Down Under Dan is a funny, a bit above-average adventure game from PowerVision, a small developer in Australia. The main reason the game is so obscure is that it was sold only within Australia. The official blurb: "...in 'virtual' time, you have four days of challenging encounters to meet and think your way through before you can achieve your quest to strike it rich and ensure that your future as a bush pilot is safe forever." The game begins with you in control of your plane. Needless to say, something quickly goes wrong, forcing you to crash-land the plane in some unknown area. Inventory-based puzzles, wacky humor, and general wackiness awaits as you blunder into one incident after another.

The game is reminiscent of Access Software's games: digitized graphics, third-person point-and-click, and numerous pixel-hunting headaches. The puzzles are not difficult, but the extent of pixel-hunting required for some of them makes the game frustrating in many spots. Some puzzles also must be solved in real-time, adding to the frustration. Fortunately, there is a useful on-line hint function which you can use, although it has limited usage (again similar to Access' games, in particular Amazon: Guardians of Eden).

The plot is decent enough and wacky enough to keep your interest, although various jabs at Australian stereotypes (albeit tongue-in-cheek) can get tiresome. Developer PowerVision deserves applause for attempting to incorporate as many neat facts about their country into the game, and I did learn quite a bit about the land Down Under while playing. So all in all, while Down Under Dan certainly won't be the best adventure game you have played, it will hold your interest through to the end - thanks to a decent premise and a unique focus on Australian culture. Better voice acting, less pixel-hunting puzzles, and more creative puzzles would lift this game into a top game. Recommended for all adventure gaming fans, as long as you don't expect too much - although you can expect to see at least one kangaroo, 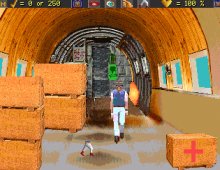 Down Under Dan screenshot

People who downloaded this game have also downloaded:
Chronomaster, Darkseed, Darkseed 2, Dark Eye, The, Duckman: The Legend of the Fall