Arguably the world's first commercial text adventure authoring program for IBM PC, Hayden's Computer Novel Construction Set is a surprisingly versatile program that lets non-programmers create stand-alone text adventures in the Infocom tradition, complete with storyline and inventory-based puzzles. CNCS uses a series of DOS-based menus and pop-up windows for building rooms, objects, descriptions, etc. A nice touch is that the game you create is automatically presented with different windows for each game element, e.g. one window for your character's inventory, one for room description, one for commands, and so on. This is much more advanced than most early games from Hayden themselves (e.g. The Holy Grail), and this multiple-window presentation is a good format rarely seen in IF (with some exceptions, e.g. Infocom's Beyond Zork). The included tutorial file and mini-game give a good idea of what the program is capable of, and the most options are self-explanatory.

Overall, CNCS is definitely worth a look for anyone interested in writing interactive fiction games but don't want to spend (a lot of) time to learn the nitty-gritty of modern-day IF authoring languages (such as Inform or TADS). It is user-friendly, versatile, and stands up quite well with time -- more than a decade after its release. The parser seems to be more versatile than later freeware program Adventure Game Toolkit (AGT), although it is still largely limited by verb-noun construct. Here's hoping that we may soon see some new IF written using this early tool :) 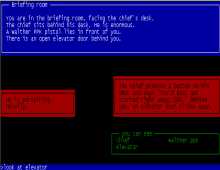 People who downloaded this game have also downloaded:
Beyond Zork: The Coconut of Quendor, Enchanter, Leather Goddess of Phobos [Solid Gold], Hitchhiker's Guide to the Galaxy, The, Bureaucracy