Chamber of the Sci-Mutant Priestess

A true cult classic, this is an original, weird adventure in the best tradition of Exxos (maker of the equally weird Captain Blood and Purple Saturn Day). I gave up trying to summarize the wacky plot-- suffice to say that you're Raven, an alien equipped with sci-powers who must rescue the future leader of your people from the evil Protozorqs.

Gameplay uses a standard icon-based interface, with some novel twists. Similar to Zork, you can cast various spells (here called "sci powers") that range from night vision to walking on walls. Unfortunately, most puzzles can easily be solved by using sci powers, and there are very few instances that require you to use items in your inventory. Still, the original plot, great atmosphere, and fun sci powers make up for the game's extremely short length. Recommended, but only to novice adventurers or Exxos fans. 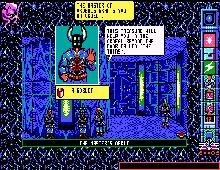 Chamber of the Sci-Mutant Priestess screenshots