The plot of Calixto Island: "A valuable museum treasure has been stolen; can you recover it? Calixto Island is a challenging puzzle with and occasional twist of humor. You'll visit a laboratory, a Mayan pyramid and you'll meet crazy Trader Jack - all in living color and exciting detail." 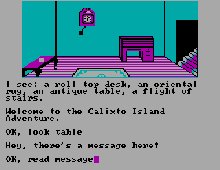 People who downloaded this game have also downloaded:
Bureaucracy, Chimaera, Beyond The Titanic, Calsoon, Apprentice