Beyond The Wall of Stars

Beyond the Wall of Stars is one of the earliest, and most unknown, computer game to take advantage of the CD-ROM's storage capacity. Written and designed by R.A. Montgomery, a prolific author whose "Choose Your Own Adventure" books were highly popular in the early 1980s, BTWOS is best described as a multimedia CYOA book -- you read the story like a book, then, once every few "pages," select one of two choices for your action that will affect how the story unfolds.

The plot is standard, and even cliche, sci-fi fare: you are leader of an urgent expedition sent by the Celadon planet. Your task is to find Tara, a more advanced race who live beyond "the Wall of Stars" to ask them to aid the Celadon in their plight against. While it doesn't make full use of 640MB on the CD, the game is over 300MB large, with most of the space taken up by speech files and short movie clips. The quality of writing is decent -- just as you would expect in any R.A. Montgomery's CYOA books: competent, but never truly spectacular. The plot and the plot branches you will choose while playing are interesting enough to attract you to the very end, but the game isn't attractive enough in my opinion to warrant replay. The "puzzles" are also minimal, because it's not only that you interact by choosing from multiple-choice options, but also that those options are more geared towards picking what you will see next, rather than solving any tough puzzles (although some choices you will make are indeed crucial to the survival of your crew).

As one of the earliest CD-ROM titles, BTWOS deserves a look by all adventure fans as one of the earliest efforts in leveraging the new medium to present an older one. If you like CYOA books, you'll probably like this "game" that unfortunately isn't as interesting as some of the author's best works. Oh, and some of the graphics are "paper doll cutouts" that look pretty bad ;) Worth a look, but not a Top Dog. 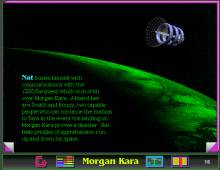 Beyond The Wall of Stars screenshot