In one of Coktel Vision's lesser known adventure game, you are tasked with liberating the earth from captivity under the eccentric alien race Bargon. The game was evidently inspired by "B" science fiction series (Dr. Who comes to mind), as it has a lot of cheesy jokes and weird aliens in Latex. Coktel's unique brand of wacky humor permeates throughout, but the puzzles are fair (and some even creative) compared to most other Coktel games, and the plot is captivating in a strangely appealing way to the end. Bargon Attack is a fun, campy adventure that would probably appeal to Coktel fans more than anyone else. The game's longer-than-average length and some hunt-the-pixel puzzles also makes for many hair-pulling sessions where you desparately try every inventory object with everything on the screen. 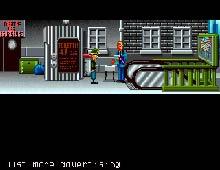