The follow-up to Konami's underrated B.A.T. 1 improves upon its predecessor in every respect, including a more intelligible plot that actually *develops* into an interesting pan-galactic drama. However, as in the first game you still have the freedom to ignore the plotline for as long as you wish to explore the wonderfully realized gameworld that is populated by colorful characters, shops, and strange gadget to find and use, including the programmable B.O.B. computer in your arm that is much more versatile and intelligent than in the previous game.

In B.A.T. 2, you are still a member of the clandestine galactic peace corps, but your tasks this time around are much more questionable if not downright strange (burglarizing a bank as a pretense to saving the galaxy is, after all, not a very common cop-thing). As in B.A.T. 1, the freedom the game affords you can be a double-edged sword: while it makes it much more fun to explore, it does mean less clues and frequent hunting for a store (among dozens) that sells the particular item you need. The world, while large, is also very disorienting since it's not laid out in easy cardinal directions, and the fact that you only need to use less than a fifth of all objects you can collect make puzzle-solving more difficult.

Despite all these shortcomings, however, B.A.T. 2 is still a highly atmospheric and original game that will please sci-fi lovers and anyone who likes non-linear games (or at least games with the *illusion* of being non-linear, like this one). 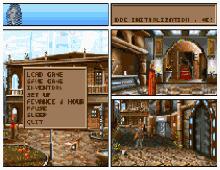