Animal by Microtime is one of the most obscure adventure games ever made. A wacky adventure set in the world of talking foodstuffs like sausages (!), Animal is a decent point-and-click game that tries to be funny, but falls far short of standards set by Discworld or Toonstruck . The plot: the town of Snackopolis is thrown into chaos after the mayor Pepereinstein has been kidnapped. As a walking, talking sausage named Peperami who works for the mayor, your job is to investigate and rescue the mayor to restore order to the city.

The game unfolds in a typical fashion: explore various locations around the city, interrogate other snacks to gain clues, solve puzzles, and defeat the bad guys. Most puzzles are banal and uninteresting - I especially dislike the fact that *fighting* is the only way to 'solve' many situations. Whatever happens to the good old days of "violence is not the solution"? On the upside, most characters - being lowly snacks that they are - have funny things to say, and 2D graphics are well-drawn and animated sequences funny enough to compel you to play until the end. Most jokes are too sophomoric and gross for my liking, though: they are much worse than, say, Leisure Suit Larry or Spellcasting series. I think the designers don't quite know what 'tongue in cheek' means. Regardless, if you enjoy bizarre adventure games that are on the easy side, and can stomach (no pun intended) cheesy and gross humor, Animal is worth a look. 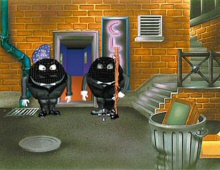