Adventure Games is a collection of four text adventures of varying quality, released as a package by Public Brand Software in 1986. Of interesting historical value is the fact that Public Brand (better known as PBS) was one of the first major shareware distributors. This compilation includes William Crowther's and Don Wood's famous Adventure, two lackluster games with very primitive parser from Buttonware called Castaway and South American Trek, and a quaint but funny little game called Return to Hell by Ed Kruse. Adventure (better known as Colossal Cave in some parts) needs no introduction: it was the first adventure game ever made based on a real cave explored by William Crowther, and still inspires a loyal following and fanmade expansions years later.

Return to Hell, on the other hand, is very obscure but deserves a lot more attention, not least for the clever use of ASCII graphics and user-friendly interface which lists all available exits and take-able objects in the room. (although this reduces the fun of discovering hidden objects dramatically). CAPS LOCK must be turned on before playing the game, which requires you to get all the devil's treasures and get out. What makes the game funny (unintentionally, I'm sure) is the various blames the game heaps on you when it doesn't understand your commands (THAT IS A DUMB MOVE being one of them). Oh well, at least the ASCII graphics made me laugh. 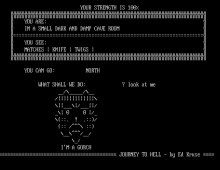 People who downloaded this game have also downloaded:
Alice in Wonderland, Arthur: The Quest for Excalibur, Bureaucracy, Adventure Fun-Pak, 007 Goldfinger