In 1989, Apogee released two "Fun-Paks," Adventure Fun-Pak and Puzzle Fun-Pak, priced at $10 each. Each "pack" contains 4 games that were submitted to Apogee by outside authors, although most of the games were designed by Apogee's Scott Miller. Most of these games are ASCII-only games with minimal or no graphics, some more interesting than others. Since the packs were never released as freeware or shareware but sold direct from Apogee, they are two of the few commercial titles published by the shareware giant.

Adventure Fun-Pak includes Rogue Runner, a fun ASCII maze game by Scott Miller that is similar to the Kroz games, Night Bomber, a bland Missile Command-type game with awful green-on-blue graphics, Raiders of the Forbidden Mine, a decent puzzle/action game that plays like Pharaoh's Tomb, and The Thing, a quirky little maze game with a text parser, although it's used only to move around and shoot the bats inside. 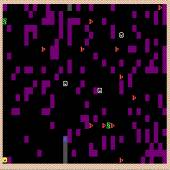 People who downloaded this game have also downloaded:
Adventure Games, Amazon, Arthur: The Quest for Excalibur, Alice in Wonderland, Adventures of Willy Beamish