Quite interesting action game from Vision. You will fly your helicopter and be free to fly in any direction you want (the view is top-down). You will be given missions such as "Destroy enemy tank convoy" or "Destroy all enemy resistance nearby ancient ruins" and such. You could even consider Seek & Destroy as a third person view flight simulation due to it's unusual gameplay, but I still think that this is just an action game. A lot of mission, many weapon types and a lot of entertainment.

Very fast, but simple shoot'em up action game, which can run on any hardware. But it likes AGA graphics, 68020 cpu and more memory. You fly a helicopter and have to blast everybody :) 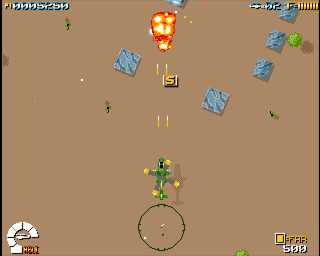