This cute platform game is considered as one of the best ever made for Amiga! What is so special about it? Well, it does look nice, the characters are really cute and the gameplay itself... I must admit it's addictive!

In a typical story of an evil character kidnapping your mother, you control one or two girls (or are they elves...) and have to complete many, many levels defeating some cute looking enemy bees, sharks and other animals. While you do that you can also collect certain items and gain extra lives. After a few levels you'll encounter a boss creature and go on until you finally reach the n-th level and defeat the final boss.

Nice little game with interesting approach to killing monsters. You just have to see that.

OK, so maybe this game is a bit girly, but hell it is a great game! This is a really fun (and cute) platform game. It has some great features such as ladders and stuff, obviously the ladders alone aren't a great feature, but being able to build them is cool :) Although you can only build 1 at once. But that just adds to the challenge :)

You have to go and rescue your 'mommy' from the tower. She got kidnapped by some witch or something I think... So you, as the daughter (or if you play 2 players, daughters) have to go and rescue her. This game is REALLY long and once you reach the top of the tower (if my memory serves me correctly) the game still carries on, and this is just the first of many 'boss' characters you have to defeat.

The game is styled in an anime type of thing, so it is probably a Japanese/Far East game, but I'm not 100% sure... A cool added extra (pun intended) is that you can get lives by collecting various letters and then magically aquiring a life from a big white fairy (who is pretty damn fine! yes ladies, im a sexist pig :D) In order to get these letters you must collect all of the roses/goodies on the level, and then all the bad guys turn into giant walking love hearts, which you must then defeat using your patented basher weapon, which is an electronice thingy that blasts out and paralyses your opponent so you can bash him from side to side...

Anyway, I think thats enough of me rabelling on by now... You won't be disapointed if you try out this game.

: Two sisters, and their mom lived peacefully... But one day the evil has come and took mom away. The two little sprites started their journey, to save the mom. Very sweet and good looking game. 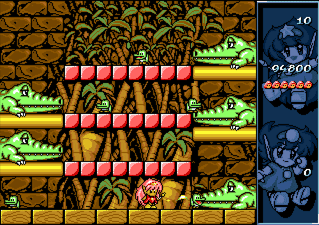