While the first Larry was aimed mainly for male adults, the second adventure was sold to a much wider audience. Larry became a mainstream figure. In the third episode of the game Larry goes back to his roots. After being kicked off from his marriage and work Larry decides to do what he knows best - try to seduce every woman he can.

Leisure Suit Larry III: Passionate Patti in Pursuit of the Pulsating Pectorals is the third entry in the Leisure Suit Larry series of graphical adventure games published by Sierra Entertainment. The game takes place on Nontoonyt Island, the tropical setting from the previous game which has since been transformed into a resort.

The controls feature a mouse-based interface and a text parser for directing the Larry's actions. Littered throughout the resort are Larry's potential mates; whenever the player interacts with these women, they are featured in a close-up portrait, once again echoing earlier games in the series. The basic structure of the game involves Larry presenting each woman with gifts, although none of these items require money to obtain, unlike in the original Leisure Suit Larry.

Leisure Suit Larry III features a second playable character, the titular "Passionate Patti", whom the player briefly assumes control over. Patty's portion of the game is much the same as Larry's, including multiple 'death' scenes and a detailed character portrait of her love interest, a male stripper. However, the Patti sequences are more reminiscent of traditional adventure games, requiring players to navigate through a maze, as well as collect items for use in later puzzles. 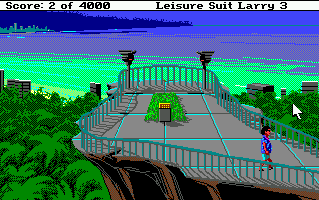