Indiana Jones and the Fate of Atlantis

Indiana Jones and the fate of Atlantis is a game attempt at creating an adventure game with a decent level of replay ability. There are three "paths" you can take, TEAM, WITS and FISTS, and which you choose determines much of what you'll do and where you'll go in the game. Furthermore, unlike many games, choice of a particular dialogue branch can effect what happens in the game, although more often than not there's only one useful branch.

In Atlantis, you are, of course, Indiana Jones, and you are trying to find the Lost City of Atlantis, helped along by Sophie, a pretty psychic. You travel the world seeking clues and items, trying to get to Atlantis before the Nazis. I wound up playing TEAM (there's a particular conversation that determines which you play), which means I brought Sophie along and she helped out with puzzles. One nice thing about having Sophie along is she'll tell you when there's nothing left to do in a particular area (if you ask her) so you don't waste time trying to find things that aren't there.

The puzzles tend to be quite easy, and while some are clever, none are exceptionally difficult. Later in the game things get harder, not because the puzzles are more ingenious, but simply because there is more work to complete it. The final puzzle is a matter of choosing the correct conversational branch, it was a pain to get the right outcome. It's perhaps the lamest endgame puzzle I've seen.

I went back and played WITS for awhile. This is where you leave Sophie behind. There were different puzzles, but none that blew my socks off. I got stuck finally and when I checked the cheat it told me to use an item I didn't have (although I'm sure I had it earlier in the game!). This was surprising, as in TEAM there was no place where you hit a dead end, and it was only possible to die if you did something that was pretty obviously going to kill you.

So then I tried a little of FISTS, which is what happens if you tell Sophie the adventure will be too dangerous for her. In FISTS you handle some problems by punching out your opponents. The puzzles are simplified versions of the ones from the other paths (I suppose the assumption is that if you want to solve your problems with violence you're probably not all that bright). The fighting interface isn't impressive: you just keep punching until you or your opponent is out. So as an action game it's pretty lame (if you want to put a quick end to these action sequences, hold down the insert key on the number keyboard and take a swing).

In the end, Indiana Jones and the fate of Atlantis is a moderately interesting game with a decent story and tolerable puzzles. But you might prefer renting the movies. 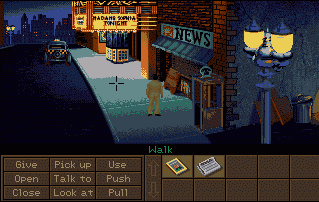 Indiana Jones and the Fate of Atlantis screenshot