The Movie conversion game, which was also released on C64. You play on the scenes of the movie and the final goal is to eliminate Joker. The C64 version takes advantage of the hardware, the Amiga version doesn't. If you're emulating Amiga, insert disk 1 into DF0: and disk 2 into DF1 to run the game. Or, switch off all drives except DF0: because if you have two or more disk drives, the game will automatically search for game disk 2. 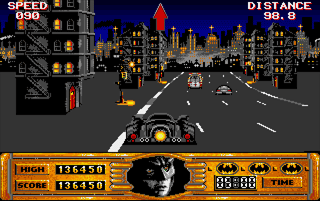