Last episode of the 2D Alien Breed series. It has enhanced graphics, very good atmospheric sound. The gameplay is not linear like in the previous Alien Breed titles. You can enter different levels, explore the whole base, the way you go depends on your decision. Tower Assault also runs on OCS machines, but it will switch to a low color mode and will turn off many speech to fit in the smaller memory. 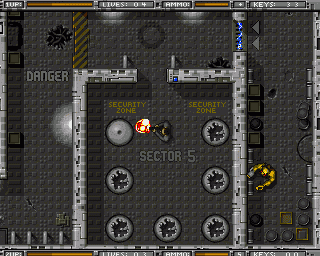