WARNING: This game contains sexual scenes that are not appropriate for kids. Please use your judgment before playing the game!

Tenshindo (a.k.a. Queen of Tinshendo '95) is a fun Hentai card game with a bit more class and computer intelligence than an average strip poker game. The rules are essentially the same as commercial card game UNO. For anyone who's never played UNO, here's an excellent synopsis of the game from Central Corner's UNO Rules page (only the portion that applies to Tenshindo): "Each player is dealt 7 cards with the remaining ones placed face down to form a DRAW pile. The top card of the DRAW pile is turned over to begin a DISCARD pile. The first player has to match the card in the DISCARD pile either by number, color or word. For example, if the card is a red 7, player must throw down a red card or any color 7. Or the player can throw down a Wild Card. If the player doesn't have anything to match, he must pick a card from the DRAW pile. If he can play what is drawn, great. Otherwise play moves to the next person. Once a player has no cards left, the hand is over. Points are scored [and the game started all over again]."

Tenshindo is very easy to learn and play. You don't even need to know Japanese words, since all you have to do in the game is match them as one way to get rid of your cards (not ordering them by numbers as in Rummy for example). If you win, one of the four opponents (young girls-no surprises here) will perform sexual antics that may offend your taste, so be warned. As with most anime games from Japan, Tenshindo features crisp, colorful anime graphics and great soundtrack. A good game for spending a few minutes' worth at a time. 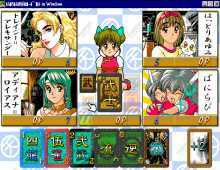 People who downloaded this game have also downloaded:
Knights of Xentar