Will you fight as a Wehrmacht Officer, or perhaps lead your comrades in the Soviet Army? You may want to hit the beaches at Salerno and Normandy as an American or British General. No matter what path you choose, you will need all your skills to triumph. The successful "Panzer General" devises sound strategic plans, and carries them out with unswerving commitment. Generals who are indecisive inevitably fail. Can you forge a battle-winning command and conquer your foes? Isn't it time to find out?

Billed as "the sequel of the century!," Panzer General II did live up to that claim-- the game boast a stronger AI, more varied scenarios, and gameplay enhancements that improve upon Panzer General, the venerable predecessor that succeeded in bringing wargames to the masses (including yours truly, who can proudly claim to *never* having finished any wargame until PG came along ;)). The game covers World War II action in the European Theater, with a cool "what-if" scenario of invasion in the United States. As The Wargamer describes, "...changes have been made to the game engine in order to bring the floating unit scale and hex scale down to earth. This in turn has allowed some units to fire at a distance. Unit size is battalion/regiment and each hex depicts 2 Km of terrain. The game comes with a campaign game, individual scenarios, Internet play, and a scenario editor. The graphics have been improved over the original, but at a hefty price. The scenario editor doesn't include a map editor." Although the game was shipped with quite a few bugs, most of them were hammered out by the version 1.01 patch (which is the download file here). There is really nothing wrong with the game I can think of, except perhaps the fact that missions playing as the US side are less interesting and varied than playing as the Germans. If you like Panzer General, you will love this underrated sequel. And if you haven't played any game in the 5-star series, or are looking for a wargame that is accessible to newcomers, look no further than Panzer General 2. 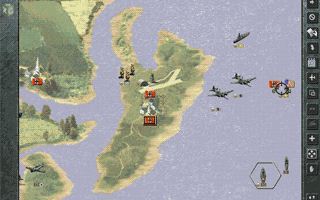 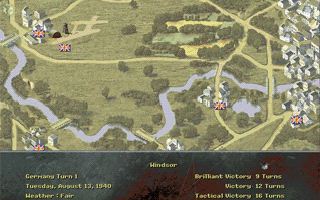