Burntime is an innovative post-apocalyptic strategy game from the makers of underrated strategy classic 1869. The goal is simple: to gain control of cities in the assigned area, in the harsh environment where mutants and monsters abound. You can barter for necessities such as meat and weapons, and recruit other survivors to form a band, enticing them with promise of food. You can assign various types of people to tasks they are most suitable for, such as fighters to take over cities. Gameplay is disappointingly simple, however, and many times it feels more like a dumbed-down RPG than a full blown strategy game. Still, attractive graphics, vast gameworld to explore, and hidden surprises in the game keep it from being completely boring. If you want a good survival simulation however, play Wilderness or Visions of the Aftermath in the Sim section instead. But if you are not too hung up on realism and want a solid strategic game that offers a unique premise, cross-genre gameplay elements, and even a 2-player competitive mode, Burntime may very well be your cup of tea. Highly recommended! 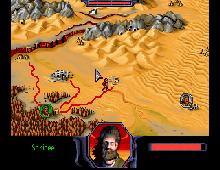