Bridge Olympiad is a solid bridge that features a diverse set of strong opponents and a comprehensive (and *long*) tournament despite lacking the pizzazz of computer bridge games (e.g. Electronic Arts' Grand Slam Bridge or Interplay's Omar Sharif on Bridge). What it lacks in beginner's tutorials and intuitive interface it makes up for with the sheer number of opponents and, as in other QQP games, a complete track record of player. The game also has one of the best computer AIs you'll ever come across in a bridge game. 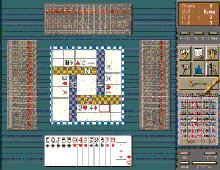