Bridge Master is an excellent bridge game developed by Greenleaf, published by Capstone. The game is reminiscent of QQP's later Bridge Olympiad, except with fewer options and no tournament mode. Although it is short on long-term play value, Bridge Master makes up for that shortcoming with excellent AI. While other games allow you to adjust difficulty level, Bridge Master lets you adjust playing style of your opponent. Whether you want the computers to be aggressive, passive, and more prone to sacrificing trumps, you can set all these parameters and change them at any time during the game. For beginners, the game includes well-written and concise on-line help, including full bridge rules, as well as a hint feature. If you like bridge, you will definitely find Bridge Master to be one of the better programs. Too bad about the lack of tournament/career mode, but there is always QQP's Bridge Olympiad and Interplay's superb Bridge Deluxe II for that. Recommended! 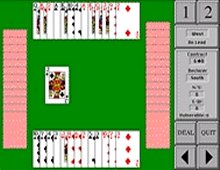