Bonobo Beach (or Cronberg, depending on which graphical "theme" you prefer) is a fun freeware computerized version of a "quickie" board game of the same name by German board game developer Kronberger Spiele, released in November 2003 at the Essen fair. Coded by Thomas Rosanski, the game is a faithful adaptation of Kronberger's classic, which resembles Reiner Knizia's games but is simpler and easier to learn - making it ideal for a quick game that lasts less than 20 minutes.

The game offers a neat twist to the typical "enclose tiles for points" gameplay fans of Knizia's creations will be familiar with. From the official blurb: "...during a turn, a player either places a tile (with varying plus and minus values) or a pawn onto an intersection [on the board]. Triangular tiles on the island have varying effects that only count when tiles are properly placed around them: doubling, banishment or switching signs. The triangles generate placement restrictions which in turn lead to forced placements and a tactical game regardless of number of players.

There are two different types of scoring. Pawns that sit on intersections that are completely built up with tiles are scored immediately and can be placed anew. Pawns that sit on incomplete intersections have to wait until the end of the game and are only scored then. The scores are determined by the values of the buildings and the triangle tile modifications. Highest score wins."

Although the range of tactical options is fairly limited, Bonobo Beach is fun, and offers enough challenge for a 20-minute game. For instance, you must decide whether to run the risk of placing a marker where someone might ruin your score by placing a negative tile, or drawing a positive marker which will benefit the next player. Similar to the majority of Knizia's games, whether or not you are aggressive or passive, or risk-taking or risk averse has a real impact on the outcome. All in all, Bonobo Beach is a nice strategic time-filler that offers fast-paced and fun gameplay, decent computer opponents, and pleasant graphics. In addition to computer opponents of varying strengths, the game also includes a network game against up to 3 human opponents. Recommended for board game fans everywhere.

Although the installer is in German, the game itself includes English version. 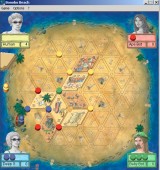