Nick Faldo's Championship Golf is a very ambitious golf game that suffers from a very clunky user interface, lack of variety, and too much focus on realism at the expense of playability.

Any golf fan who tries the game won't be surprised to learn that it disappeared quickly from store shelves and became one of the rarest -- and worst-- golf games in existence. NFCG is everything PGA Golf, the most comparable competitor, is not: the game is very hard to get into, has very few courses (only two), no tournaments, only 8 opponents, and absolutely no long term appeal because you can't record your performance statistics.

There are many things wrong with the user interface that playing the game is very frustrating. Firstly, there is no indication of the power of your club on screen, so every time you take a shot, you need to refer to the manual. Next, you need to take into account all the different variables: near wind speed, long wind speed, ball lie, spin, club stance.... it can be quite overwhelming initially, and extremely tedious. Driving the ball is exceptionally difficult-- the game basically requires you to double-click in a microsecond. Anyone who's not very dexterous with their mouse might as well give up on the game. Fortunately the game offers "amateur" level, which gives you the option of re-taking your shots.

NFCG is a good example of a game that's mired in too much emphasis on realism that it loses sight of the most important aspect: playability. Recommended only if you're a masochist who simply must play every golf game ever made. 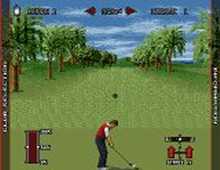