Adrenaline Vault's critical review says it all about this missed opportunity that could have been so much more:

"Gooch Grundy's X-Decathlon takes the whole olympic theme and turns it on its ear. [You compete] in ten wacky events like Hippo Push, Crazy Climbing, Nice Doggy Jump, and Full-Contact Figure Skating, to name a few. You have a choice of six characters for your on-screen persona: a brutish he-man type, a kangaroo, an ape, an Amazonian woman, a space alien, and Gooch Grundy himself. Gooch Grundy is your typical couch-potato, athlete wanna-be -- slightly overweight and dressed like a geek.

The biggest problem with the game is that not one of the ten events are any fun at all. After trying each event once, I was ready to toss the CD out (I didn't, though). I tried each event a few more times to see if maybe they grew on you, but they don't. They are no fun. I won almost every event the first time I played and I had no urge whatsoever to play any of them again.

Here's an example of the gameplay: Hippo Push -- Step 1 - walk up to the back of the hippo and press your button. The hippo walks ahead a few steps. Repeat step 1 until you win the race. Sure, you can throw things at the other "pushers", but you don't have to -- you can win without throwing things. Boring. Here's another example: Platform Kickboxing -- You and 3 other contestants are on a platform. You walk around beating each other up and throwing things at each other. This event, too is just not fun. The event also takes way too long to finish. Every second of the game clock takes about 5 seconds of real-time, so the event takes about 10 minutes to finish. I was bored after the first minute. Pure agony. [The gameplay is] horrific. The only way the gameplay could be worse would be if the game was a self-running demo or the characters did not even respond to my commands. The events are absolutely no fun at all and are thoroughly boring, as I've said numerous times already. Kicking, punching, running, jumping, swimming, yawn, yawn, yawn. I was able to win most events the first time I tried them. In many of the events, your opponents use no strategy at all and will throw things at you at random times and they never seem to be trying to prevent you from winning. Gooch does have multiplayer support, so perhaps the game would be more of a challenge when competing against human opponents.

Overall: Don't let the generous 2.5 stars fool you. Gooch was a decent idea, but it just wasn't done with enough gameplay to make a good game. While the other parts are decent, you just can't make up for the lack of gameplay, no matter how good the graphics, sound FX, or music are." 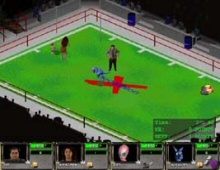