As an intended "sequel" to Interplay's classic Wasteland, this game falls short of that classic in numerous ways. However, it is a good, solid RPG on its own: interesting plot (you are mercenaries slowly mutating from the effects of radiation), characters, and sub-quests. The worst thing about this game is the awful play balance: you will die so frequently in the earlier battles that it only takes the most persistent and die-hard gamers to get to the point where your characters are strong enough. Save often! 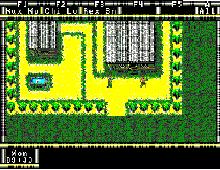