Wipeout is one of the most obscure Softie games ever, based on an equally obscure trivia game that managed to have an UK version despite lackluster ratings in the US. In this trivia game, a screen of sixteen possible answers (to a question such as "Which of these inventions were discovered by accident?") are shown - eleven are correct, the first awarding $10, then $20, etc. up to $110 for the last answer. The other five answers are incorrect, and hitting a "Wipeout" loses all your money from the whole game (ouch). The two contestants with the most money at the end of round 1 go to play in the Wipeout Auction. From 12 options, players bid on how many correct answers they can pick out (up to the maximum of 8). Hitting a wipeout allows your opponent to steal the frame if they can find just one correct answer. Winning two frames gets you through to the final. In a pleasantly fun end game, the finalist has to select 6 correct answers from the 12 options offered within 60 seconds. Like one of the famous pricing games in The Price is Right, the contestant can hit a button to make the computer reveal how many correct answers they have until either they run out of time or they have found all six.

The computer version of Wipeout is at best only a time waster for those few minutes away from Jeopardy!. The graphics, in extended EGA mode, is below-average, and the trivia questions get old quickly because there is only a few categories (which you can't select, unlike Jeopardy!. Overall, an average game for an average show -- try it only if you're a trivia buff who's already played everything else. 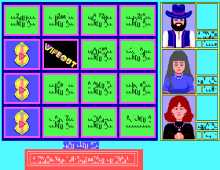