Hollywood Squares is a solid computer version of a popular TV game show starring celebrities, recently revived by Whoopi Goldberg. The game is basically a tic-tac-toe game with celebrities in the grid. The host (who looks nothing like Peter Marshall in the TV original) would ask a trivia question to a celebrity of his choice (e.g. "Paul, Abraham Lincoln was born in what state?"), who, of course, would make a joke first ("Naked and screaming like the rest of us") then either give the real answer (Kentucky) or a fake, "bluff" answer (let's say, Illinois). The contestant would have to decide whether he/she agrees or disagrees with the given answer. If the contestant is right, his "X" or her "O" goes in that space; if he or she is wrong, the opponent gets the mark. The exception is if the square would lead to a win (i.e., if the first contestant is trying to block the opponent). If no one gets three in a row to win, then the first contestant to get five squares is declared winner. Like the game show, the winner of the day is the one who wins two out of three.

The computer version manages to capture the show's exuberant atmosphere and excitement, with excellent caricatures of celebrities and hundreds of questions. The game's truth-or-lie format makes the translation to the PC screen easy, since it doesn't require top-notch AI to make the game interesting. Overall, this is one of GameTek's better game show conversions, and great fun for all game show fans. Highly recommended! 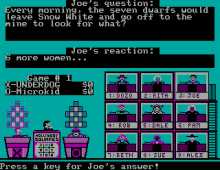 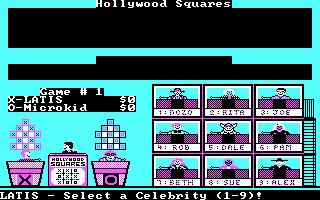